A Portrait of the Poor on Chicago’s Magnificent Mile

Today is not my first experience on Chicago’s Magnificent Mile.  I first walked the mile a year ago when Bill had a real estate conference to attend.  Neither one of us had any ideas about Chicago and couldn’t wait to search out all that the city had to offer.  When we arrived on that winter day in 2010, my senses were awakened to many of life’s greatest pleasures.  There were beautifully designed buildings of award-winning architecture on every site line, some very old historical buildings and some, more contemporary in style.  The delectable smell of Chicago style “dogs” with the aroma of kraut, and deep-dish pizza caught my attention on more than one city block.  The hustle and bustle of inner city life was a buzz in every form.  Taxicabs colored the streets with gold, and red, double-decked buses cruised tourist around the city of ten million with their deafening microphone announcements of every site of interest that a person could take in on an afternoon tour while being exposed to the very cold elements from atop a bus. 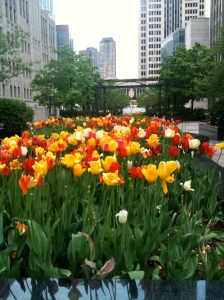 The Magnificent Mile is indeed magnificent in every sense of the word.  It is one of Chicago’s claims to fame as it boasts a full mile of shopping in over 400 of America’s most well known stores such as Bloomingdale’s, Neiman Marcus, Nordstrom’s, and not one but, two Macy’s – one on either end of the mile long stretch of shopper’s paradise.  I believe Macy’s wanted to be certain they captured every potential spender either on her way up or down “the mile”.   We strolled along taking in the sites.  I could see beads of sweat forming on Bill’s brow in the fifty-degree temperature.  As I observed the sweat phenomenon taking over, I knew for sure it was time to take him to the hotel and away from the singing of cash registers.  I was certain that once he was confined in the room, away from anything that looked or sounded like moldy money leaving his pocket, he would surely recover.  With an obvious case of anxiety taking over my dear husband, we went back to the hotel to allow him a time of recovery.  I was very accommodating to him as I silently mapped out in my head the experience that I would allow myself without him, the following day, while he attended the conference. 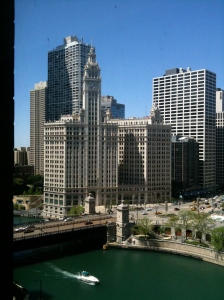 The next morning, when I was sure that Bill was far, far away from my new-found paradise, I slid into my most comfortable pair of shoes and weighted my purse down with green and plastic.  There would be nothing to stop me this day!  In my mind, Chicago had no idea what was about to storm its street.  I was about to run the mile in record-breaking shopper speed.   However, as I left the hotel, I realized I had a false start.  The stores would not be opened for a few more minutes.

Just outside the hotel, was a quaint coffee shop where I could stay warm while waiting for the starter gun to sound.   I went inside, placed my order and pulled a chair up next to a large, plate-glass window that exposed the tantalizing view of my dream world.  I had just settled in with my warm cup of coffee when out of the corner of my eye, I noticed a woman sitting on the sidewalk.  It was obvious to me that she was in need.  She was dirty.  Her clothes didn’t match and were torn.  She held a small Styrofoam cup in her brown, stained hands in hopes of hearing the plink of a coin falling from time to time.   I intently studied the woman’s face.  Her lips were cracked and her skin was wrinkled and dry from the cold.  She had shallow eyes with dark circles.  Her head hung slightly and her shoulders slumped as though she carried shame.  Many, many people passed by.  They walked around her, behind and in front without acknowledgment.  I sat in disbelief as I watched the number of people who passed, simply ignoring her.  I sipped my coffee and stoically observed all of those who turned a blind eye and deaf ear to this poor woman calling for help.  How could this happen?  How did she get here?  What’s her name?  Does anyone see her?  Why is she seemingly invisible?   I sat in confusion pondering these thoughts over in my mind and the more I thought, the more I could feel my ideas of shopping taking on a new image.  I could feel my interest in the bargain basement waning.  Thoughts of Calvin Klein, Ann Taylor, Gucci and the likes began to fade into the background of the portrait of the poor, who ironically sit, begging for a single coin on the very street where daily, cash registers sing.

I am a wife, mom, grandmother, aka "Honey". I am passionate about my role in life. I love to share my faith in Jesus Christ and His great love for all people. My writings are personal and come from my heart as I hope to share my vulnerable thoughts, struggles, and celebrations with you.
View all posts by Sandy Byrd →
This entry was posted in Chicago, Poor. Bookmark the permalink.